A search for the "terroir" of the famous French cool-climate areas of northern France in Australia led me to buy land in partnership with my brother David, in northern Tasmania in December 1973. This search study became part of my doctoral thesis on viticulture completed at the University of Sydney in 1977. The vineyard was named Pipers Brook Vineyard after the local brook and is now part of history. Pipers Brook's second-label Ninth Island became the most widely distributed and recognized label from Tasmania. Pirie was the Pipers Brook sparkling wine label and was first made in 1995. It became the most awarded of all the wines I made and has been drunk by Her Majesty Queen Elizabeth II on at least two occasions.

The climatology which led me to the Pipers Brook area was crude by today's standards. Pipers Brook scored some "bulls-eyes" in planting chardonnay and riesling in the cool area close to the north coast of Tasmania. In later years however the cooler slopes produced great sparkling wines and by the time I left Pipers Brook in 2003, sparklings were our most acclaimed wine style world-wide.

I have continued to research wine climates and these days the knowledge is more precise in predicting "terroir". In a paper at the International Cool Climate Symposium in Hobart in 2012  I selected the best index for predicting grapevine ripening in cool climates. When the opportunity to apply this learning arose again recently I could not resist planting another sparkling wine vineyard in what appeared to be a grand cru sparkling site.

I named the vineyard Apogee, meaning the highest point. 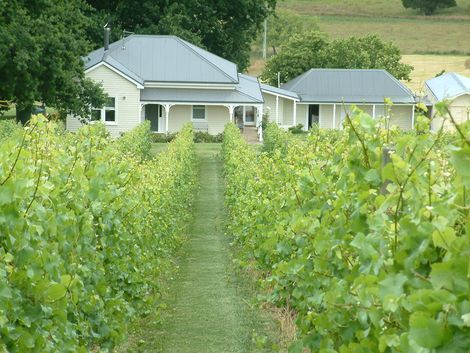 The philosophy behind Apogee:

1. Use the latest climatology to locate a perfect ripening location for sparkling wine using the classic Champagne grapes Chardonnay, Pinot noir and Pinot Meunier with a small amount of Alto Pinot gris, known as Fromenteau in Champagne, and on yellow volcanic soils we make a small amount of very special Alto Pinot Noir.

2. Produce only Single Vineyard wines so that the output fully reflects the distinguished vineyard conditions and intensive vineyard manipulations

3. Restrict the scale to 2 hectares, which is the average size of a holding in Champagne. This is deliberately chosen to test the theory that the ability to manage vineyards perfectly  limits their scale. 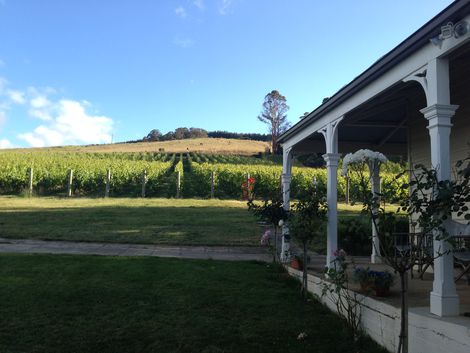 Having managed vineyards in the past in  Tasmania from 200-413 hectares, with appropriate work-forces, I am strengthening my view that small scale IS important in the search for the highest quality.

Apogee was awarded Tasmanian Vineyard of the Year Award in 2013 which was the first independent test of progress on this journey.

Apogee will not grow in scale under my watch. This limits production to between 10,000 and 20,000 bottles per year.

Some of  the sparkling wine is disgorged on the property.  The main production is a classic-blend, traditional-method sparkling comprising around 45 % of pinot noir and 50% chardonnay and the balance from pinot meunier (this is the Deluxe Vintage Brut ). A Deluxe Vintage Rosé is also produced made up of around 90% pinot noir from the best sites, and 10% chardonnay. A small amount of table wine is made from pinot gris and pinot noir grown on the property. This is the Alto Pinot Gris and Pinot noir. See the video tasting notes

The goal is to produce very high quality wines from a small, hand tended area which is operated on a commercial and sustainable basis. I hope and believe that the combination of the highly researched site with the latest knowledge of terroir theory is leading to wines which are very expressive of the terroir.

To order, please go to the Buy Wine tab and use the shopping cart or download our Order Form; scan and email to info@apogeetasmania.com . 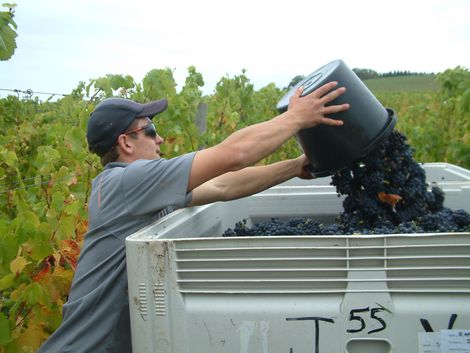 Pinot noir grapes shown here being harvested from Block 2 just above the house.

When APOGEE was first planned, in conjunction with Landcare Tasmania, we decided to fence off the water catchment zone to create a nature reserve to protect our water supply. As a result, it is now a reserve of eucalyptus and wattle, an unpolluted water source, a running brook for eight months of the year and home for a family of platypi.

You will have to use your imagination with this photo—platypi are furtive and disappear when approached. Can they see that well, or do they feel the vibrations? 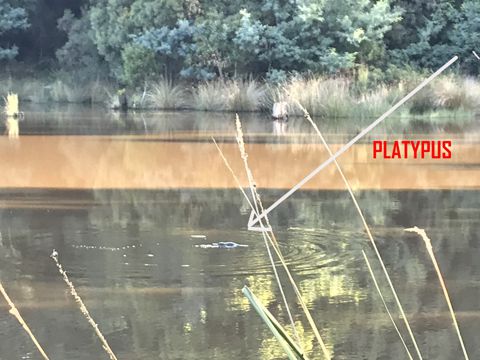 Platypi in the running brook

Our grape growing philosophy is to produce the best and healthiest fruit with the least invasive management practices available. This involves using a scientific approach based on understanding the ecology of the vineyard and deploying the most effective and sustainable practices. For instance, we ensure the health of our soils by fertilizing the interrow grass and clover, mulching it and placing it using a side-throw mower on the under-vine strip. This organic matter feeds the soil microbiome. We have a thriving worm community as a result, which, in turn, aerates the soils allowing soil bacteria to multiply. 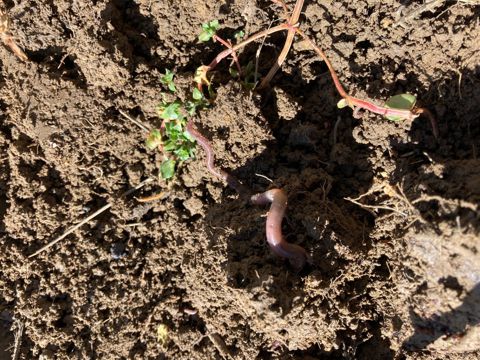 In contrast to the Old World, where close planting is aimed at increasing economic output on low vigour soils, the trend towards closer row spacings in the New World has been driven, in part, by a desire to blindly emulate the great vineyards of Europe, and partly by a desire to reduce vine vigour on high vigour soils.

When Andrew and David Pirie first planted vines at Pipers Brook in 1974 they used a typical northern French system called Intermediate Row Spacing (IRS) with rows 1.8m wide and in-row spacing of 1.25m giving 4,444 vines per hectare. This was one of the first close-planted vineyards in the modern Australian industry.  This vine density compares with around 9,000 vines per hectare in modern plantings in Burgundy and Champagne, but as seen in the next section, it displays the same leaf area per hectare as found in those French regions.

While close planting achieves improved yield and quality on the poor calcareous and gravel soils of France, on the richer agricultural soils of Australia it can lead to shading, lower yield, and lower quality than traditional plantings.

History at Pipers Brook showed that, in some cases, close planting increased vine vigour. This has been found elsewhere according to studies conducted in South Africa and California.

This experience led to the evolution of the APOGEE Scott Henry system where again a 2.2 x 1.3 m spacing produces the same , or slightly superior, leaf area per hectare to the French regions, but with a reduced vine density of around 3,600 vines per hectare, which better suits the vigour potential of the Tasmanian soils. 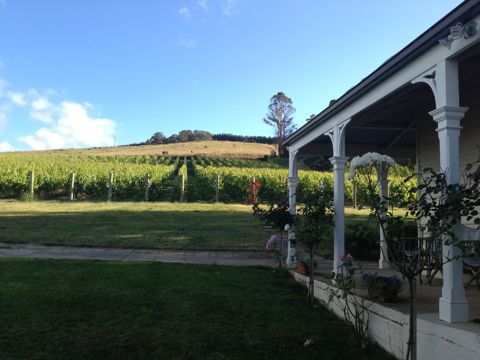 Over the years I have developed a special Scott Henry trellis system, called the Unilateral Scott Henry, which aims at presenting a leaf area to the sun as well as providing an aeration window adjacent to the fruit. This is arguably the most advanced trellis system being employed in cool-humid climates world-wide.

What distinguishes a Scott Henry vineyard from normal systems is that the leaves extend all the way to the ground - lower cordon shoots are trained downwards to fill the space under the vine arms or cordons. The resulting large leaf area at around 20,000 m2/ha, is a leaf area/ha comparable to the close-row plantings of Burgundy and Champagne. This enables even ripening, and high-quality wine production at high yields. Aeration is the best preventative measure for bunch rot, which is a major issue in cool humid climates, and the windows, which aerate the fruit zone, reduce the need for chemical intervention. 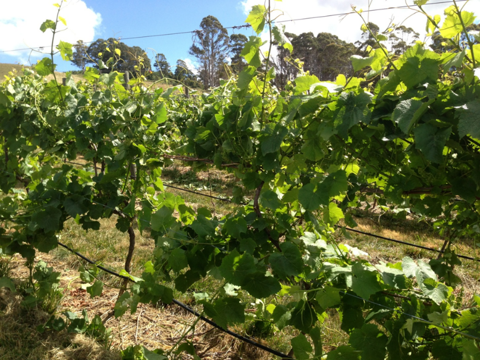 Fundamental to APOGEE’s winemaking is meticulous attention to detail in the vineyard and harvest. Most of the flavour in wine is created by sunshine illuminating grapevine leaves which, in turn, need to have the right moisture supply. We are dedicated to maximising this process to improve wine quality. Simple as it sounds, the devil is in the detail. Careful planning is aimed at achieving the right blend of grapes for each label. Being a small, single vineyard operation, the blending must be done at harvest with a field blend of fruit. The seasonal conditions can be monitored and this decision can be changed right up to the last moment.

Once at the winery, the fruit is made according to a recipe, some of which dates to my first harvest in France 40 years ago. The wines are treated with a minimum of preservative — in the case of APOGEE Deluxe Vintage sparkling an assessment of other sparkling wines shows we have less than half the preservative level of a peer group from Australia.

Grapevine clones used in each label at Apogee