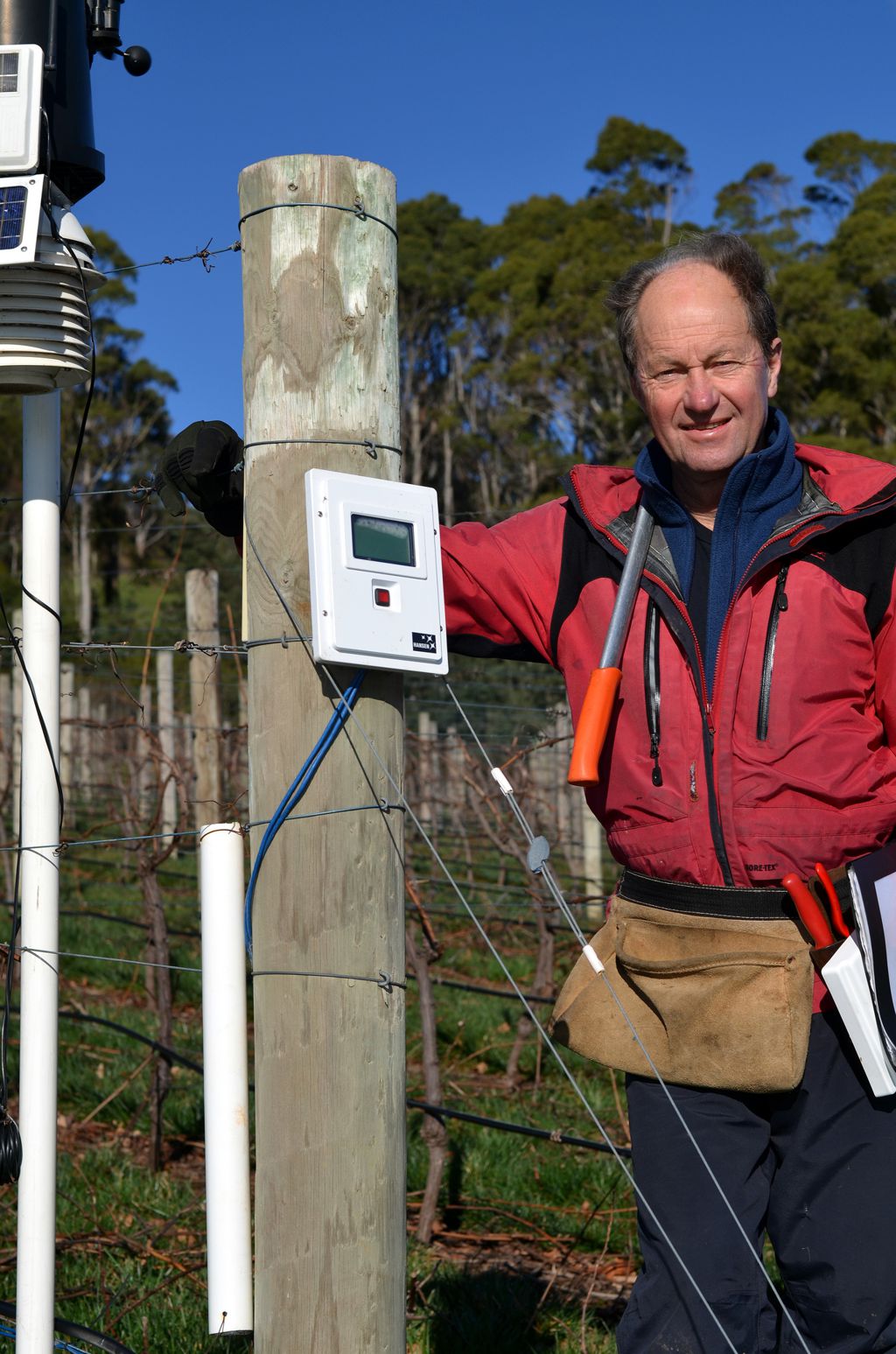 Impacts of Climate Change on Vineyards

SOME IMPACTS OF GLOBAL WARMING ON THE CHOICE OF GRAPE VARIETIES

By Dr Andrew Pirie   (standing next to Apogee's weather and soil moisture stations, in northern Tasmania)

The impact of global warming on the world of wine is still running under the radar but vineyards planted this year before the end of their lifetime, will be growing grapes in a different climate. Will it be different enough to change the output of our favourite regions and wine styles? Yes.

One impact on the Australian industry will be a final victory for the so-called “alternative” varieties which, in fact refers to every variety apart form the mainstream grapes of Australia. In 2012 62% of all wine grapes grown were either shiraz, chardonnay or cabernet sauvignon. Yet none of these was planted widely 40 years ago. And it looks like in 40 years’ time they will be replaced by varieties more suitable for warm conditions – think sangiovese, tempranillo and nebbiolo.

SEASONAL SENSE
Why are grape varieties sensitive to seasonal conditions?

The reason for the sensitivity of wine grape quality to season is due to the impact of season on the dynamics of ripening. The best quality grapes arise when ripening starts once the heat of summer has passed.

This is for two main reasons:

Armed with this knowledge let’s test two scenarios both of which result in poor quality wine.

The onset of ripening will be too slow, and it will miss the 27⁰C warm days required for colour change. The grapes will be partly coloured then the 40-day ripening (which will take up the rest of the season) will result in grapes too low in sugar and too high in acid, actually lacking colour and tannin. The result: an average rosé at best.

Conversely, plant pinot noir in the warm Riverland region and the opposite occurs. Grapes ripen too quickly, the colour change occurs in mid-summer under stressful conditions, which are not good for colour or quality and the 40-day ripening period becomes 30 days. At harvest there is too much sugar and insufficient acid for good wine, and again poor colour because of the colour change problems. Flavour will suffer because of stressful conditions leading to a “dried fruit” character.  Result – another low quality rosé.

Now we can also answer the question: Should we plant grapes according to their fashion and appeal, or should we choose varieties that suit the territory in which they are planted? Australia has tended to do the former and Europe the latter. Europe has been growing chardonnay for 2000 years or more, Australia on a commercial scale 45 years.

As a young viticultural research post-graduate 45 years ago I decided that, buried in the two-thousand-year history of grape-growing in western Europe there must be some rules for the New World.

In my PhD thesis I had a table showing Europe’s planting of grape varieties vs regional temperature, and a fairly similar guide for California, constructed in the 1940’s.

Interestingly one region that has followed the guide and has a relatively stable choice of varieties is Tasmania – with chardonnay, pinot noir, riesling, pinot gris the dominant varieties. Their common feature is that they are early ripening, requiring relatively mild summer temperatures to carry the grapes through their seasonal cycle to a satisfactory conclusion, which is measured as 23% sugar content in late March producing 12-13% alcohol in the finished wines. Tasmania provides these conditions in abundance.

One of the surprising challenges is to find a measure of climate that accurately predicts how grapes ripen. Day-degrees is a common measure, but it is complicated by the choice of base-line temperature above which ripening is active. Another is Mean January Temperature (MJT) published in 1969 by a researcher from South Australia, which predicted, much to my chagrin, that the cool limit of grape ripening was somewhere just south of Melbourne. Tasmania was judged too cool, which conflicted with my early findings using other methods and made it very difficult to find government support for new vineyards in Tasmania in the early 1970’s.

The measure that works best it seems is GST (Growing Season Temperature – an average of the seven-month grape growing season October-April).

While it does not perfectly take into account the influence of diurnal range (grapes ripen quicker for a given GST where the day-night range is smaller) it gives a good working guide for ripening.

It turns out if you know GST for your vineyard you can shortlist the suitable grape varieties and save yourself 40 years of trial and error. Who has created the shortlist?

Greg Jones, a professor emeritus of geography from Oregon presented one to an Australian wine conference back in 2006. It embodies the European experience of over 2000 years with some New World experience thrown in.

So how does this help you choose your grape variety, and what are the impacts of global warming?

Some white varieties are more flexible than others, notably chardonnay and riesling. Chardonnay can grow in regions as cool as Chablis in France to those as warm as Margaret River in Australia, while riesling flourishes in the temperate climes of Germany’s Rhine Valley and on the sunny slopes of the Clare Valley in Australia.

But varieties like the early ripening Burgundian origin pinot noir and Alsatian pinot gris are more finicky. Pinot noir thrives in a relatively narrow temperature band as measured by growing season temperature (GST) of 14 to 16°C. This range covers the cooler parts of northern France and Tasmania (a GST of around 14) to the cooler parts of Victoria, notably Mornington Peninsula and the Yarra Valley that both have a GST up to 16°C.

Some of the most famous pinot noir producing regions like Burgundy, Central Otago (NZ) and various parts of Tasmania have a GST of 15.4. On this scale 1o C of global warming will take these regions to a GST of 16.4, a rating that is acknowledged as making them unsuitable for high quality pinot noir production.

Climate change scientists vary in their prognoses on rising temperatures. How many years will it be before the weather station registers consistently higher prevailing temperatures? According to the most recent climate change reports it could be within the next 30 years.

Already notable pinot noir producer Ata Rangi in Martinborough (NZ), has publicised the fact that they are experimenting with later ripening varieties like tempranillo. That’s a big step for one of New Zealand’s founding pinot noir winemakers Clive Paton who began reimagining Ata Rangi's future in 2006 after watching An Inconvenient Truth. Al Gore's grim climate change documentary had left him in no doubt. Growing grapes was a game that would soon be played with new rules.

‘I made a conscious decision then to make sure we had syrah and warmer climate varieties in the ground,’ says Paton. ‘Tempranillo is another we're experimenting with. There will be a shift in what we're growing – whether that's in 50 years or 100 years, I don't know. I want to be prepared for it. Having older vines has helped us markedly, so that's another reason for doing this now. I don't want to be in a position where I'm starting again at the same time as all the others.’

In Australia some winemakers are thinking along similar lines. Brown Brothers traditionally located in north-east Victoria have invested heavily in Tasmania, purchasing brands and viticultural land. Shaw and Smith invested in the Coal River region, and back in 2007 I fortunately secured 20 hectares in Lebrina, land with the unusual combination of being at the cool end of the cool spectrum (GST 14.5⁰C) at 210 m altitude, but frost free during the growing season.

Apogee’s 2019 vintage certainly bodes well. The season overall was Tasmania's second-warmest summer on record, with the mean temperature 1.60 °C above average, a little cooler than the record warm summer of 2015-16.  The Apogee grapes were picked fully ripe and in perfect condition. A red wine from pinot noir has achieved 13.4 % alc/vol., which exceeds our expectations of the site, perceived originally as a sparkling wine location. It’s a while yet until these wines are released but we think Al Gore would most likely approve.