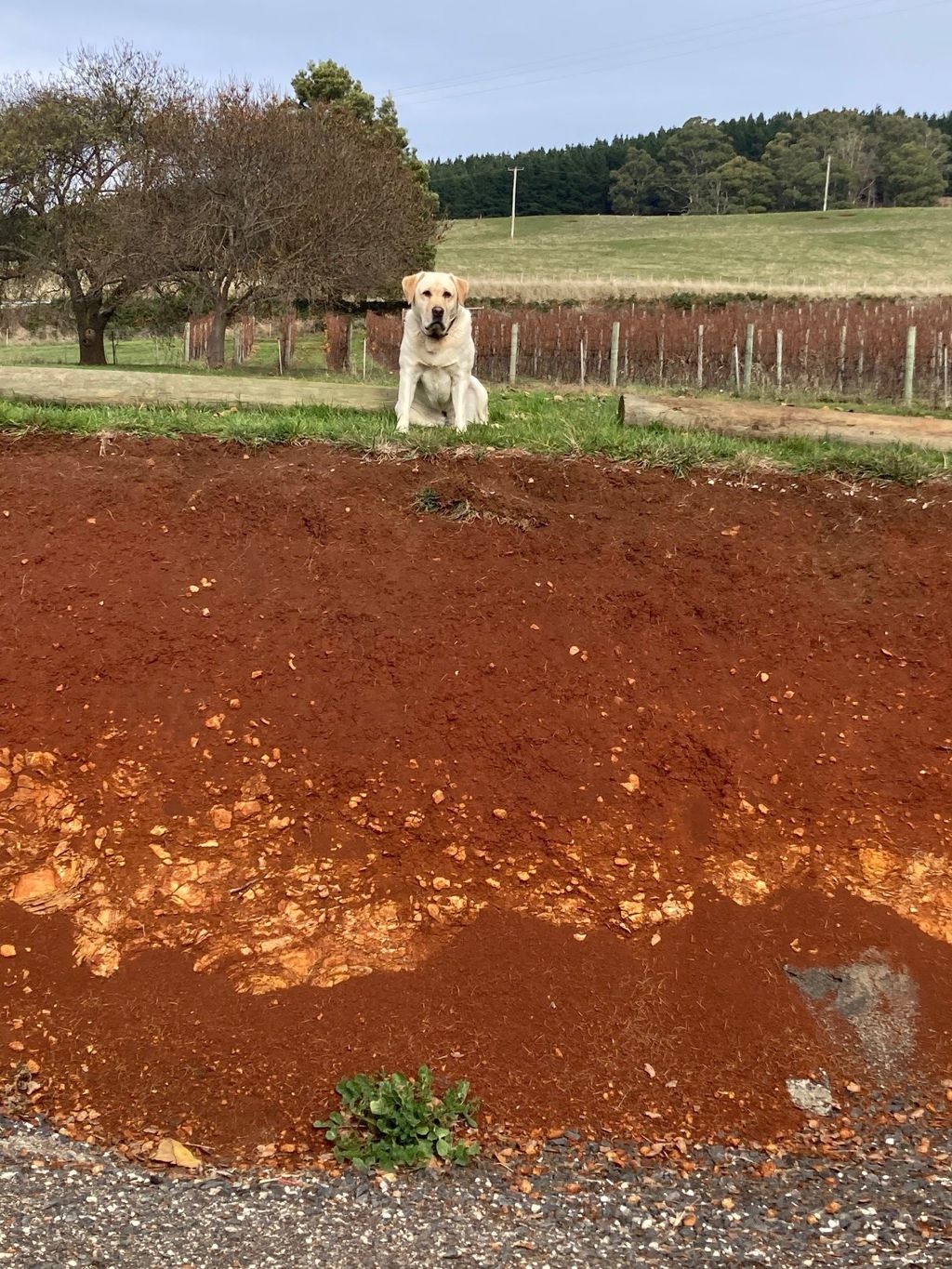 Caption to photo:  Olli sitting on the soil profile at APOGEE, Lebrina TAS.

Andrew Pirie delves into the role of soil in terroir and wine flavour.

It remains a mystery how soil imparts flavour to wines. According to early commentators on Burgundy there is enough soil type variation in the Côte d’Or (Burgundy) to account for all the variation in the region’s wine styles, reinforcing the traditional view that vines directly derive grape flavour from the minerals in the soil.

Some rules of thumb have been proposed: sandy soils make light wine; on clay the wines are full-bodied, well coloured and tannic. On chalky soils wines are alcoholic and have good bouquet. Soils containing iron oxide produce wines with good colour and aroma.

One of the most frequently quoted ‘facts’ is that limestone soils impart minerality, as exemplified by the words of a Champagne commentator. ‘Working its magic again, 2008 brings electric acidity, charging it with great freshness of structure and a grand chalk mineral presence’.

Limestone beds underlie the great vineyards of Burgundy, Champagne and the Loire Valley as well as some of the new sites in southern England, so it is not surprising for the lay observer to believe that somehow the vines dredge the chalk calcium from the soil to create a mineral sensation on the palate.

Minerality, in itself, is a difficult sensation to quantify— ‘a taste as if licking wet stones and often a chalky texture to match’ suggests it is as much a physical sensation as a flavour component. Meaning that ‘minerality’ may be due to a combination of acid and tannin, which are natural texture-inducing components derived especially from grapes grown in cool climates.

Regardless of the basis of minerality, the easiest way to demolish the shibboleth that limestone is a key ingredient of great terroir is to point out that one of the greatest regions in the world, the Haut Médoc, has no natural limestone in its sandy gravel profile. Chateaux Margaux, Lafite and Latour achieve their greatness on deep alluvial soils, which, chemically, are at the other end of the spectrum to chalk or limestone because they are acidic.

The same conclusion can be arrived at scientifically. In Germany, vines grown on chalky Muschelkalk (shell limestone) soils have much less calcium in the sap compared with clay-based Keuper soil. Interestingly, intervention by means of the addition of nitrogen fertilizer can change the relative proportions of soil calcium content.

What limestone contributes to terroir is potentially the same thing found in the gravel soils of the Médoc – supreme drainage. And water matters.

Mild water stress, a slight restraint in moisture supply to the vine roots appears to have a dominant influence on terroir. Vines growing under mild stress, especially late in the season after berries change colour, send more of the sugars produced by the leaves to the fruit as opposed to shoots because the shoot growth is restrained by conditions just dry enough to stop shoot growth but not so dry as to stop photosynthesis.

Enter the soils of Tasmania. Most of the top vineyard sites are based on the geology of basalt or dolerite rocks. At Apogee our basalt-derived soil is called a ferrosol because of its high iron content. These ferrosols have high clay content, but unlike many clays the profile has a granular appearance, which is due to the modifying influence of iron oxide. Iron alters the clay structure and makes it more friable and porous. This leads to the supreme drainage that is a characteristic of privileged vineyard sites around the world.

The vine roots of the 14- year-old vines at Apogee penetrate to a depth of two metres or more, giving the vines resilience and potentially create more mild stress-induced flavours. Other regions in the world with ferrosols include the Kaiserstuhl in Germany and the Dundee Hills of Oregon, both of which are noted for their pinot noirs.

The degree of stress is also modulated by the dryness of the atmosphere, called atmospheric demand, and this appears to be another part of the interactive ecosystem we call terroir.

Andrew Pirie, honorary research associate at the Tasmanian Institute of Agriculture and University of Tasmania, is researching grapevine terroir with the aim of publishing a review of research in this area, and a popular text on the ecology of fine wine, or what we call terroir.